With an eclectic background as a vocalist and musician on both coasts and in Eastern Europe since the late 1970s, Eva Moon has been writing and performing her original music and theatrical works since 2002. Far from typical singer-songwriter fare, her compositions are ironic, energetic commentaries on modern life.

Her original stage shows include “7 Deadly Sins and Me” which had a nine-month run in Seattle, “My Perfect Life and Other Delusions,” “The Deal With It Cabaret” (all performed with her band, Eva Moon & the Lunatics), and The Mutant Diaries: Unzipping My Genes, her first entirely solo show, available streaming on Amazon. She moved on to the musical play First You Jump, which she is currently rewriting as a short story collection. The first story, “Terminal Velocity,” is available free here. She has released five CDs, and her work has appeared in the movie soundtracks of “You May Not Kiss the Bride” (directed by Rob Hedden, 2011) and “Plunder” (directed by Danny Schechter, 2009). Eva plays keys and ukulele and sings in fifteen different languages, including English.

More recently, Eva has focused her energies on writing. Her plays have been staged across the U.S. and in the U.K. Her award-winning feature screenplay, HOUSE ODDS, was optioned. She lives with her husband and two naughty cats in Redmond, Washington, and is currently working on her first novel. 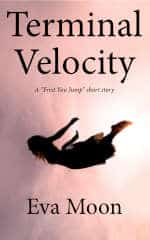